"Treat others the way you would like to be treated yourself."

Our fantastic Y5/6 football team have been getting some great results again, winning the first schools cup group match 5 - 1 against Barnston last Wednesday.

There was no stopping them and after their midweek cup win against Barnston they went on to beat Woodslee 5-2 in a match on Friday. A great game with goal scorers being Alex Davin, George Forshaw and Luke Pownell. Man of Match had to be extended to 2 children, Alex Davin and Ryan Atkinson. A special mention must also go to our 2 girls, Ellie Herbert and Lear Rooney who have both been brilliant all season.

Our footballers are giving David Beckham a run for his money with their stylish hair dos! Football practise was certainly a lot more fun on Mad March hair day! 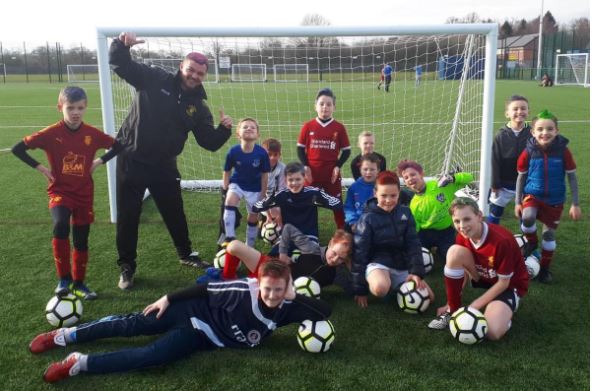 We played our final few matches at Heygarth Primary and although we suffered a few defeats we were overall winners in the South Wirral Primary league. We would like to say thank you to parents who came to watch each match, especially at Heygarth when it was bitterly cold. Thanks you to the children who turned up to each match with enthusiasm, 100% effort and were respectful of other teams. A final thank you to Mr Dodd-Berry and Mr Bradley who organise everything associated with our CTK football team. Without them we wouldn’t be able to enter these competitions, let alone win. Well done CTK footballers, you have made us proud!

Here are the results of the South Wirral Primary League:

CtK yr 4/5 v Overchurch yr 4/5 A great game of football which was quite physical but fair, saw our little super stars from yr 4/5 win 2 nil against a team of giants from Overchurch school.

CTK took an early lead through goals from Harry Bradley and Liam Gannon. Overchurch came back into the match and were threatening a goal of their own but for some great defending from Charlie Roberts and Howard Willett and some great saves from Declan Devoy.

It was CTK who were playing some great football after the break with great wing play from both Alex Lear and Sam James but unfortunately we couldn't get passed their keeper. A one on one saw Joseph Dodd-Berry make a fine save which led to a chance for CTK after Pattrick Patten played a lovely pass into Jobe Oconnor who just missed the target Star player was Declan Devoy.

The Coaches couldnt be prouder. Well done to all, the training on Friday nights through the winter is paying off.

We have started the first of 3 football matches at South Wirral High, competing against other local teams. We had two of our very trusty School Games Crew, Tom Kitney and Daniel Weedall at this event and here is their match report.

We started off by playing against Woodslee . In the first few minutes Felix hit the post. Then, shortly after, Ryan had a few good attempts. All of a sudden they hit us on the counter attack but luckily Ellie made a decent tackle and then a great clearance to Felix who put the ball in the back of the net with great composure. The final whistle blew. A good first win for CTK of the day.

The last game of the day was against Brookhurst. In the first few minutes Ryan almost scored but hit the post. Ellie had more good tackles. Joe, the goalkeeper, managed to save a goal but overall the defence made sure Joe had to do very little. A fantastic goal from Frank saw the team celebrate their second victory of the day. Luke almost made it a 2-0 score towards then end but Brookhurst’s goal keeper was too quick.

On the whole two fantastic games from CTK team A. Well done!